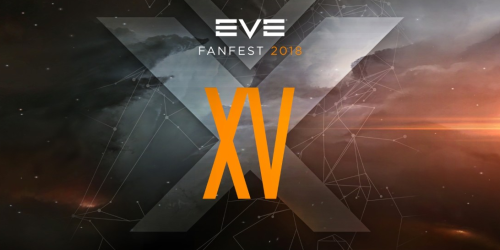 This year’s Fanfest was a special one: it was the 15th anniversary of EVE Online and full of amazing announcements! Ranging from quality of life improvements to PI, to a completely new kind of space, with a new faction, ships, as well as weapons.

In the midst of it all were a number of our Unistas. Some of them (Knicpaw and Titus Tallang) even active as official volunteers to make the whole affair smooth sailing.

We asked our attendees to write something about their best memory from Fanfest 2018. Most of them supplied us with some neat tales after our CEO poked them enough. So without further ado, we present to you the stories of our Unistas:

“The most memorable event at Fanfest 2018 for me was meeting other EVE players and especially the other EVE Uni players. Being able to nerd out about EVE with other people who know what you’re talking about is great and no-one looks at you strangely (most of the time). Have you heard about PI?”

Graduate, Director of Education, omnipresent on all campuses:

“Community once again came together to celebrate, not the game, not the publisher but what they’ve achieved over the years. Not as individual factions in the game but as the community that carries the game and each other.”

“During the opening keynote address at the 2018 Eve Fanfest, a new exotic ship came into view cradling in its three-fingered claw-like hull a menacing ball of pulsating energy. Floating weapon turrets unlike any I had seen before came alight shooting a single searing beam of destruction with increasing power. I was hooked. Throughout the conference more details were revealed about the new Triglavian Collective, their ships, where to find them in dangerous unique Abyssal deadspace full of environmental threats and their treasures including mutaplasmids which transform the attributes of modules. I was determined to learn all I could, and seek them out in game as soon as they appeared.“

Graduate, Professor, omnipresent on all campuses:

“I sang Latin for an Amarrian wedding officiated by the Space Pope at FanFest 2018. I met Max a few years ago at one of the FanFests.  So, this year, when I heard that he was doing a wedding as The Space Pope, I asked him if he needed someone who could sing Latin. I did a brief audition for him and some of this companions.  They immediately thought that I was incredible, and started making arrangements to include me in the wedding procession.”

My first Fanfest was awesome from start to finish, and it seems unfair to single out one thing as the best. The various presentations and roundtables were great, but CCP Games Games was as unexpected as it was hilarious, starting out as a cheesy 70’s quizshow and ending up as a Japanese crazyshow. The Party At The Top Of The World with Permaband and Basshunter was a perfect end to it all, with crazy EVE’rs both on stage and on the dancefloor.

However, the thing that truly made Fanfest shine for me was the people. I loved meeting up and hanging out with fellow unistas, as well as having discussions about the weirdest of topics, be it with goons, pirates, industrialists or whoever. It was hard not being a bit starstruck when meeting well-know CCP’ers and major players in the game, and where else can you suddenly discover that the guy you’re chatting with over breakfast is the same guy whose blog you’ve been reading for 3 years?

So, Fanfest – come for the events, but stay for the people, that’ll have to be my biggest takeaway from it all!

The most memorable event of Fanfest 2018 for me was getting to participate in the Streamfleet roundtable with CCP Guard and the streamers who literally introduced me to the EVE universe and to EVE University. It gave me a chance to say “thank you” to just a few of the people who work so hard to promote the game.

“What is my most memorable event of FF 2018?”  It may be cliche to say, but it was VERY MUCH the people. I was also lucky this year that I got to see the event from the point of view of a Volunteer; I was able to meet almost everyone during check-in, and was available to help those who had questions.

Everyone was excited and friendly, and willing to interact with those outside their own group/circle because we have SO MUCH in common (aka Internet Spaceships).  Players were “Jove”-vial (pun), telling stories about their best (and most embarrassing) moments, and poking fun at each other while accepting all styles of gameplay.  Also, there was A LOT of attempted recruitment.

Personally, I enjoyed the roundtables and player speeches/panels; I learned SO MUCH about ESI and 3rd-Party applications that I think I will forge into that arena with my own app (eventually, as there is a bit of a learning “cliff”).

Reykjavik and Iceland are BEAUTIFUL, and the people are friendly with almost no language barrier.  It is the perfect destination for a vacation, and for those who have a spouse/partner, there is plenty for them to do while we capsuleers are nerding-out.

As far as arranged events, the standout ones for me were Elise Randolph and Hedliner’s talk on ‘A History of Fleet Commanders’ – which was one of those things like the ‘This is EVE’ video that just make you go “Wow – I remember why I love this game”, and the CCP Games Games, which had me in stitches. But it was also wonderful to meet up with some of the lovely people I met at last year’s Fanfest and also meet some new people, who I hope to see again at the next one.

Thank you for an amazing Fanfest 2018!

We would like to express our sincerest gratitude to our attendees for holding up the flag of EVE University at Fanfest 2018 and of course to CCP and everyone who made this wonderful event possible!

Next year will have no traditional Fanfest, but you can count on our members showing up at meet-ups all over the world!

We will actually have an EVE University meet of our own in London on June 30th this year, so you can look forward to hearing more about that in the near future.